There is a well-known need to abandon fossil fuels and invest in renewable energies, towards the decarbonization of the economy and the objectives set out in the Paris Agreement.

The road to decarbonization implies a profound change in the current fossil fuel-based economic model. This will require a strong commitment to energy efficiency, innovation, and renewable-based electrification. 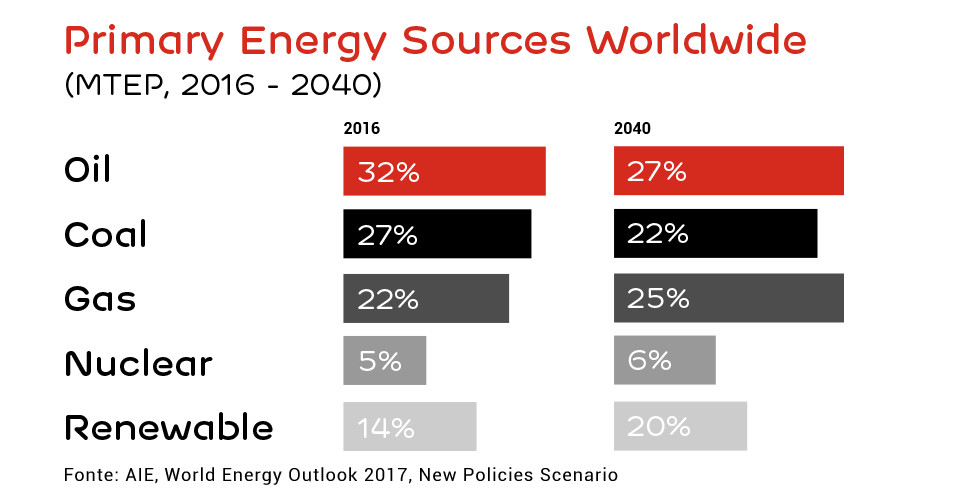 But what can be done in the present scenario? What is to be done until cheaper technologies are created, on a larger scale, to produce renewable energy on various fronts and meet the growing energy demands of the world's population? For end users, this involves reducing their day to day energy consumption; for producers, it means focusing on the development of renewable energies, mitigating the impact of fossil fuels, and finding new strategies to offset any damage caused to the planet.

What type of waste do coal plants produce?

In order to understand how to minimize the environmental impacts of thermoelectric plants (those that produce electricity by burning coal), we need to know more about such impacts.

Do you know how electricity is produced in a coal-fired power plant?

Briefly put, finely milled coal is burnt in large boilers whose heat is then used to heat up water. This high-temperature heated water releases steam, which makes turbines move. And it is the movement of these turbine blades that activates a generator and produces electricity, which is then transformed into the electric current we use in our homes.

And what waste is produced in this process? Most people believe that global warming and the release of polluting gases are the most worrisome consequences of coal-based energy production. But in fact, besides gaseous pollutants (such as sulfur oxide and nitrogen oxide), coal combustion produces three kinds of solid waste:

These solid products (ash and gypsum) could be simply ignored or perceived as waste, about which there is little one can do. But with the introduction of the concept of clean coal, thermal power plants have begun to implement technologies capable of reusing these products, or in some cases contain them, thereby preventing them from being released into nature.

An example of the technologies used to prevent ash from spreading through the atmosphere and cause phenomena such as acid rain (which was so widely discussed in the 1980s and 1990s) are the so-called electrostatic precipitators. These consist of smoke circuit plates that attract ash and transport it to storage silos.

Bottom ash, on the other hand, may also be stored and reused if plant boilers are equipped, for instance, with a wet removal system.

Instead of being simply deposited in landfills, these ashes can be reused, as they were in Sines Thermoelectric Plant, where 15 to 20 trucks were loaded with ash every day.

This material is used for several purposes, especially in the construction area. For instance, all Euro 2004 football stadiums in Portugal were built with ash from this plant.

Desulfurization (deSOX) is another way of giving back to the Planet part of what is consumed when generating electricity from fossil fuels. The term 'desulfurization' means a chemical process that transforms sulfur dioxide (SOx, a pollutant gas) into a raw material that can be used for several purposes: gypsum. The Sines thermal power plant used this technology and produced 15 to 20 trucks of gypsum per day. Want to see how it worked? 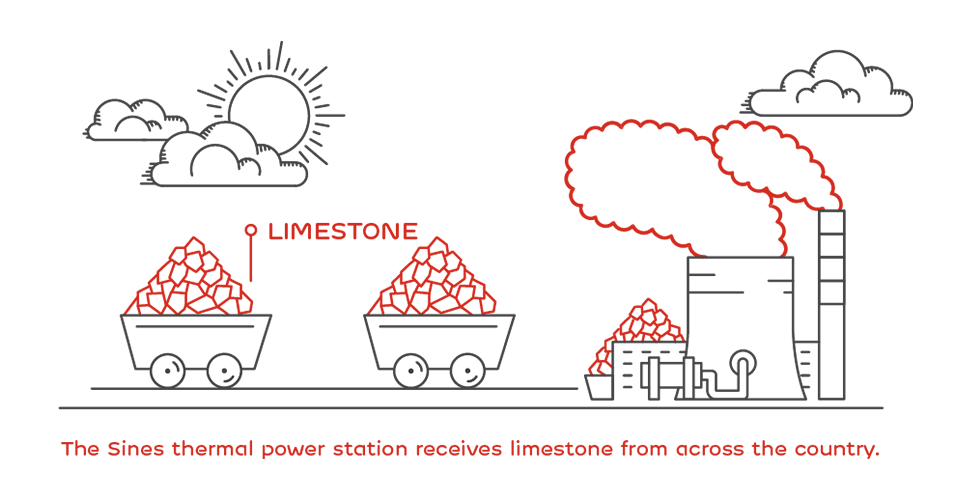 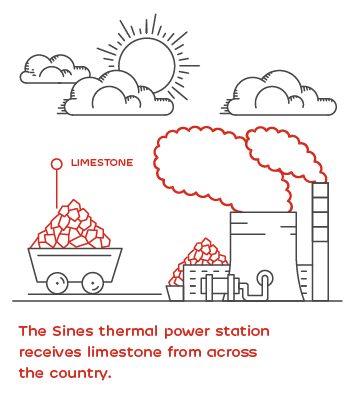 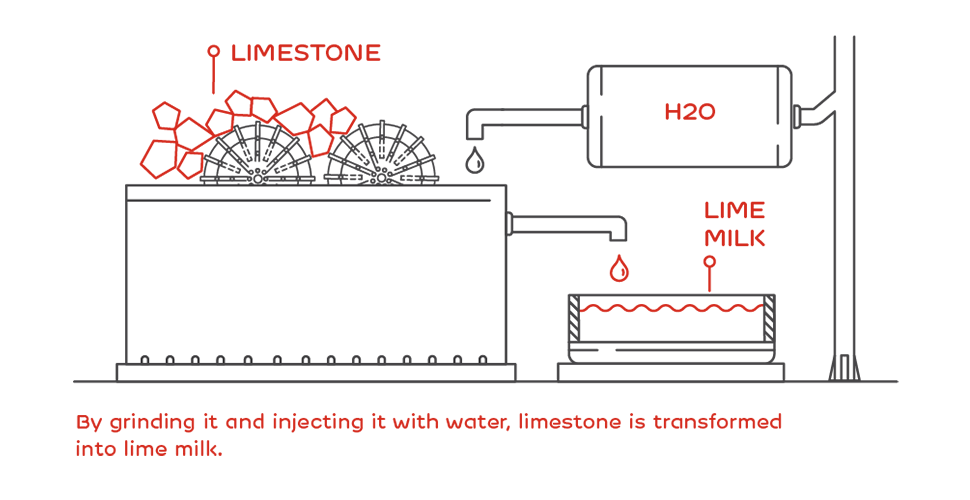 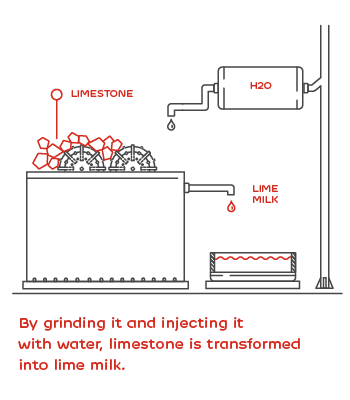 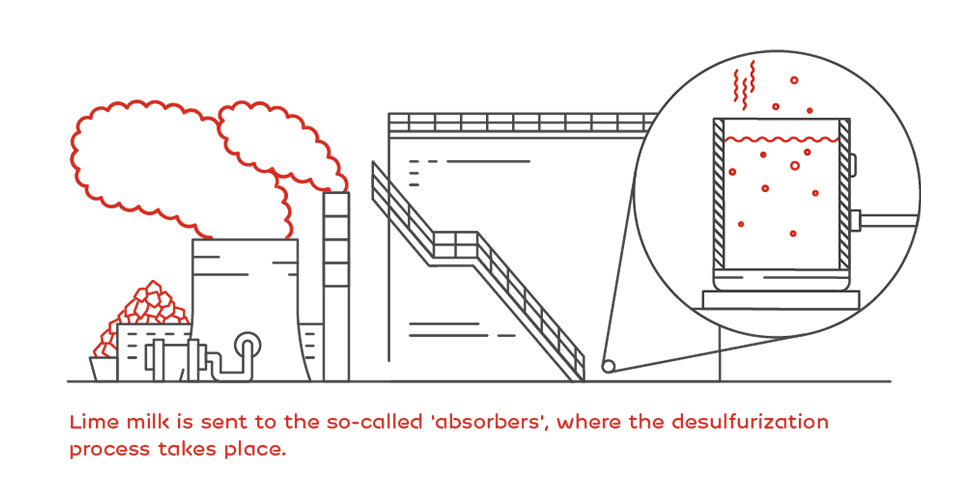 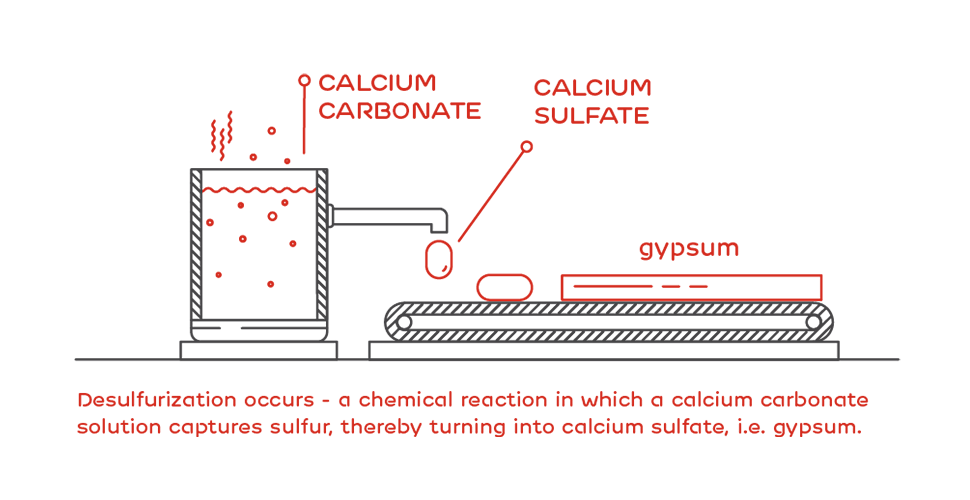 Thus, aside from producing electricity, the Sines power plant was also a gypsum factory, boosting the reuse of waste material which would otherwise be deposited in landfills. In the year 2017, with a coal consumption of about 3.6 million tons, 140,000 tons of gypsum were produced. These were sold in the domestic and international market for different purposes, such as plasterboard and other applications.

Like sulfur dioxide, which we have already discussed,  pollutant gases resulting from the burning of coal also include nitrogen oxide (NOx). Aside from being responsible for the production of azotic acid, which then results in acid rain, this gas is harmful to the respiratory system.

European regulations, which have lowered emission limits for these gases, have led to the development of new technologies capable of eliminating them effectively. Such is the case of denitrification (deNOx) technology: SCR - Selective Catalytic Reduction.

SCR is a method for converting nitrogen oxide (NOx) into nitrogen (N7 - which we naturally find in the atmosphere) and water using a catalyst. It is one of the most cost-effective nitrogen oxide reduction technologies, as its efficiency in eliminating NOx can reach 90%. 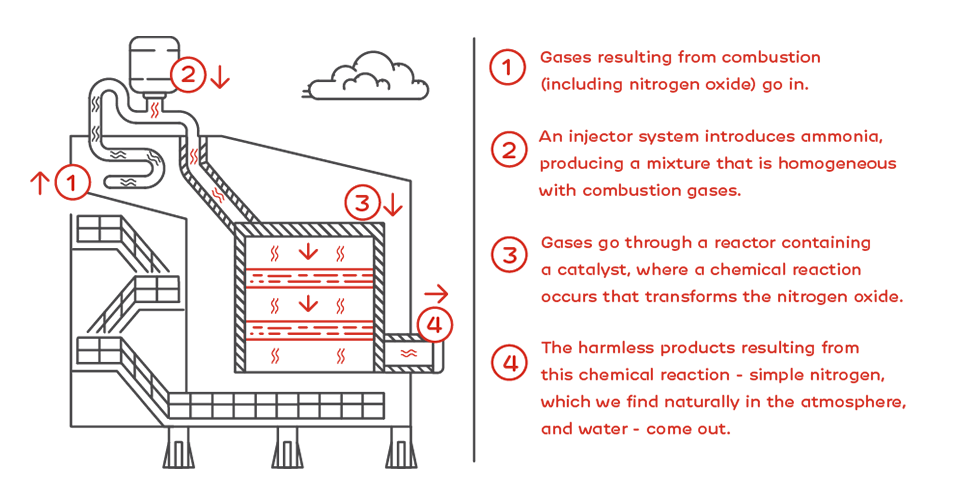 The Sines Thermoelectric Plant was a conventional EDP plant that used imported low-sulfur coal as fuel. With an installed capacity of 1,256 MW, it consists of four identical, mutually independent generator sets, each with an electrical output of 314 MW.

The first generator set went into operation in 1985. In full operation, it accounted for about 15% of Portugal's entire energy consumption. One of the most recent power stations in the Iberian Peninsula, Sines was also among the three most efficient coal-fired plants in that area.

In Sines, the implementation of the Selective Catalytic Reduction (SCR) process in 2011 required an additional €100 million investment, which has significantly reduced the emission of nitrogen oxides (above 80%).

The result of this effort? More confidence and more recognition of the competent entities materialized in environmental certifications by ISO 14001 and Registration by the Eco-Management and Audit Regulation.