Reintroduction of the osprey in Portugal | edp.com

stories
Reintroduction of the osprey in Portugal

Ospreys stopped breeding in Portugal even before the year 2000. Now they are back... and they came by plane.

Somewhere on the Alentejo coast, 1978. Perched atop a steep and windy cliff, a nest made of twigs, grass and moss goes unnoticed in the landscape.

Close by, a huge bird of prey stands on a rock, watching the horizon, protected from the wind by its long feathers. Suddenly it spreads its wings and leaves, flying over the ocean.

With a wingspan of almost two meters, it is brown on the upperparts and predominantly white on the head and underparts. The wings, slightly arched when it is flying, give it the appearance of a seagull over the sea. But this is a male osprey, also known as 'guincho', part of one of the last three known couples in Portugal at that time.

The introduction of the irrigation perimeter on the Alentejo Coast and the surge in angling pressure have changed the previously isolated coastal plateau, which was perfect for establishing new nests.

The growing human presence in the region, due to farming and livestock breeding activities, was another threat factor, as were the incentives to hunt rock doves, often confused with ospreys by hunters along the coast. 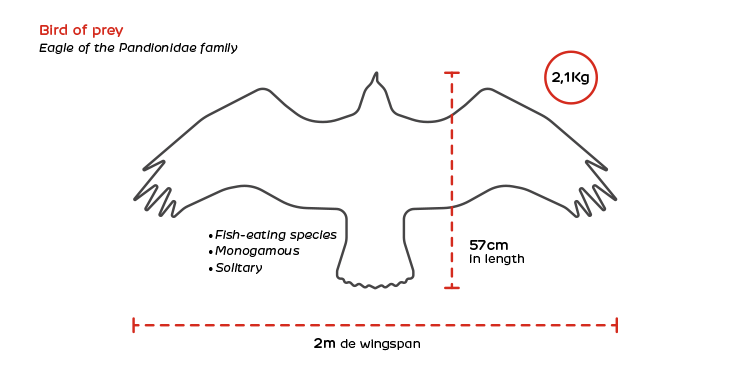 The last osprey in Portugal

The male osprey dives over the water and glides before stretching its paws, at the very last moment, to catch its prey - a sea bass that had little luck that day.

But the osprey's future in Portugal was also doomed. The three pairs registered in 1978 gradually disappeared, along with the migratory routes that once brought them back to reproduce, making the country just another temporary destination.

In 1990, our friend joined a female who had been left alone, but they were unable to nest. And years later, once again widowed, the male osprey set out to look for the last remaining female, whose nest had been destroyed by a stone block some years before.

The female osprey died of natural causes in 1997, and the male was last seen flying over Portuguese waters five years later, in 2002. It was the end of nesting ospreys in the country. 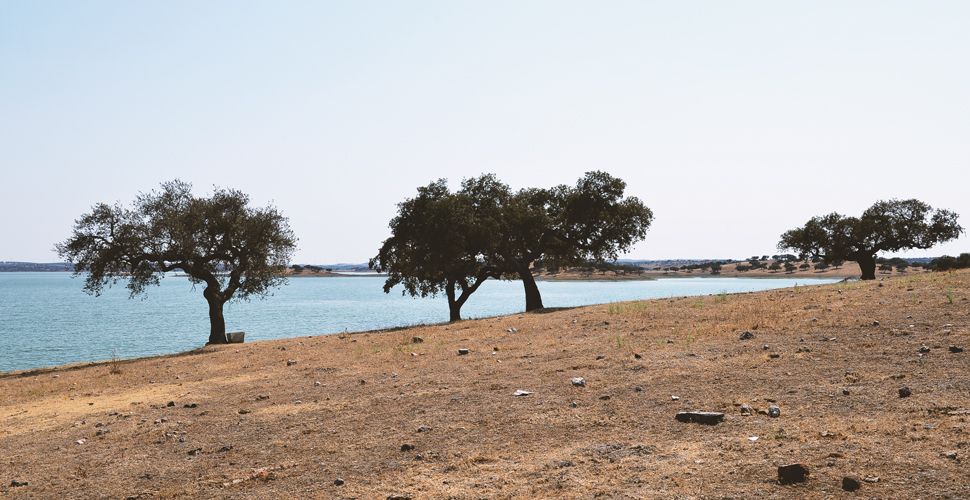 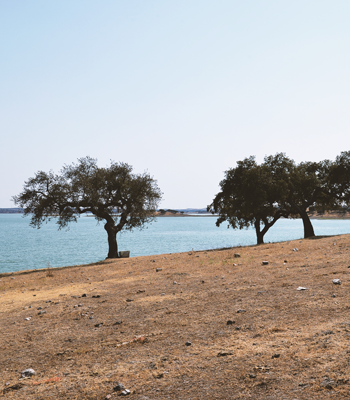 The years passed and there was no sign of ospreys in Portugal. But the work that could have prevented the end of nesting ospreys in the country was finally undertaken in 2011. With EDP's financial support and the involvement of other partners, researchers at the CIBIO (Centro de Investigação em Biodiversidade e Recursos Genéticos - Biodiversity and Genetic Resources Research Center) started working on a project (similar to other projects in Europe and the Iberian Peninsula) that would eventually bring back the species.

"It was a historic opportunity - a major company wanted to fund the recovery of a species that had disappeared from the country."

The CIBIO team chose Alqueva Dam for reintroducing the species, not only because it is a vast site with plenty of food resources, but also because it is relatively quiet and safe for animals. It is also close (from an osprey's point of view) to other interesting food sources, such as the Sado and Tagus estuaries.

Sara Goulartt, EDP Deputy Director for Climate and Environment explains: "dams are excellent sources of food for ospreys, and Alqueva Dam had outstanding conditions for such a complex project."

The researchers established their base at Roncão Farm, from which they would lead the operations. In addition to direct financial support, EDP contributed to the project's implementation by involving local partners and providing electricity - first with a temporary generator installed by EDP Distribuição, and later, as soon as it became possible, through an autonomous photovoltaic solar production system. 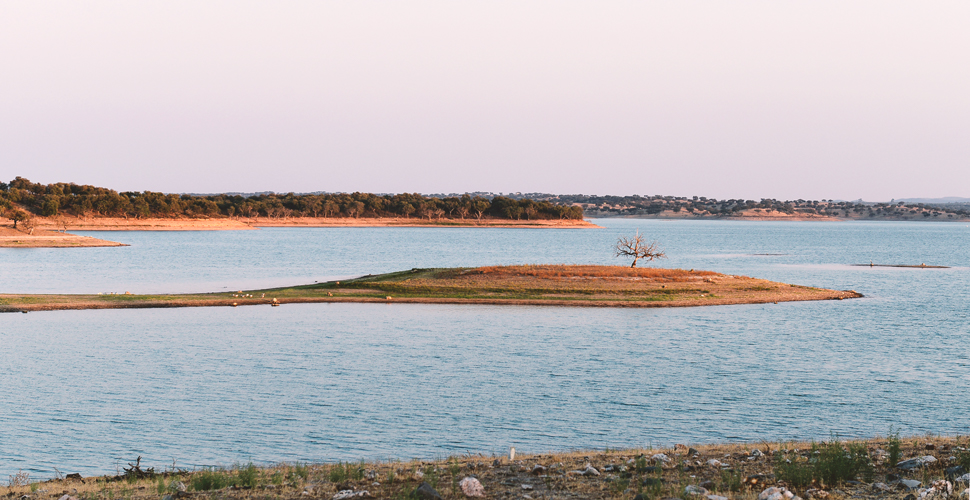 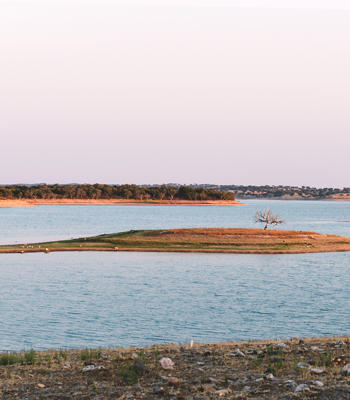 The goal was clear: bringing young ospreys to Alqueva and helping them grow safely. The birds would then recognize Portugal as the place where they grew up and come back 'home' to nest and reproduce after leaving the country on their usual migratory routes.

A change of air

The goal was reached for the first time in 2011. The young ospreys were able to rest their wings for a few hours and were brought to Portugal by plane, thanks to TAP's support, under controlled safety and comfort conditions. 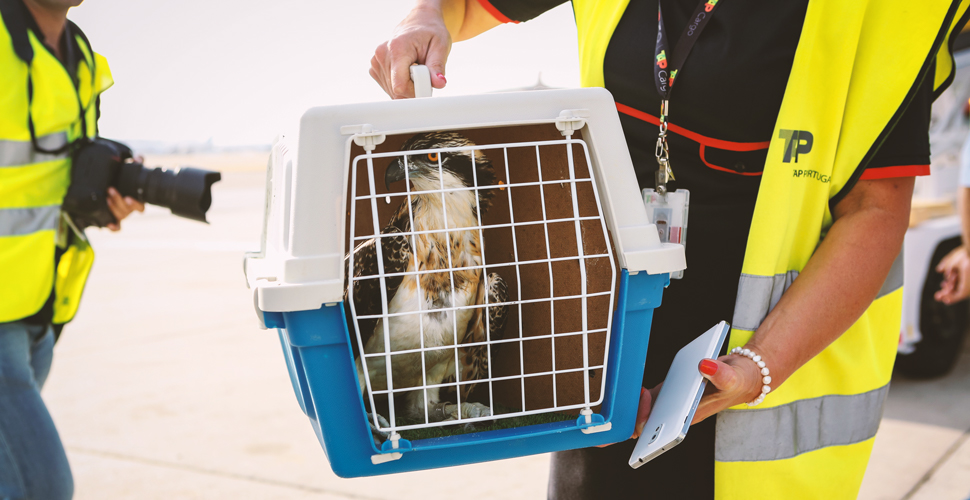 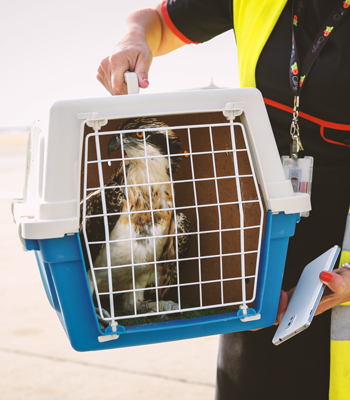 The partnership and the flights went on for 5 years. Every year, ten to twelve juveniles aged 4 to 6 weeks old would arrive at Lisbon Airport, straight from Sweden and Finland, where the species is abundant.

Flights were always held late in the afternoon so as to minimize temperature differences between Portugal and the Nordic countries.

After arriving in Lisbon, the young ospreys were examined by veterinarians and taken to Alqueva, where they were separated by age in artificial nests in order to become accustomed to the place.

The first flight in freedom

Alqueva, 2011. The young ospreys stay for a few days at the 'acclimatization towers' to grow a little more familiar with the place. Far from home, but now in a milder and well-protected setting, the young birds start training their wings inside the shelters - moving them frantically, spreading the straw of the makeshift nest in all directions. This is the first impulse to return to freedom.

And that impulse is respected: at night, a CIBIO team silently approaches the 'acclimatization towers' and removes the protective nets from the artificial nests. The next morning, the ospreys wake up to something new: they can fly again, they are free!

It was with much excitement that CIBIO technicians watched the young ospreys venturing out on their first flights. Now in freedom, they will remain in Alqueva until migration time. 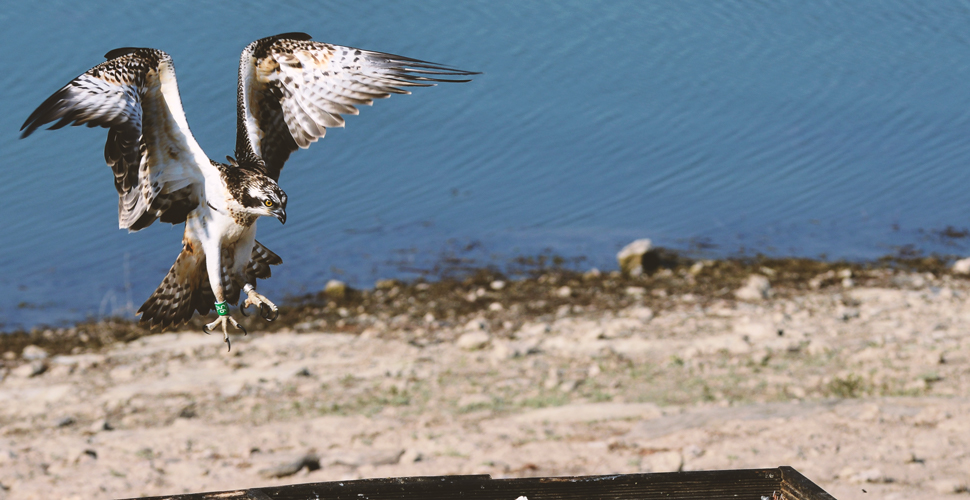 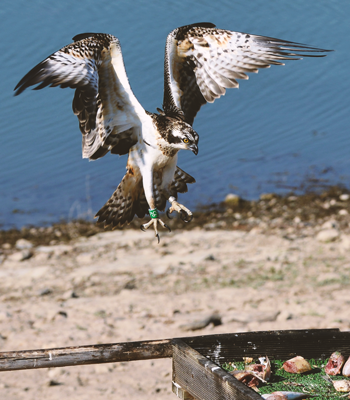 The ospreys eat 3 to 4 kg of fish per day, which is only possible because they are living in an area surrounded by water. To make sure they don't run out of food, the team has a cage with live fish in the water, which they can use whenever necessary.

Known as 'hacking', this species reintroduction method has been successfully implemented several times in the US.

Given the distance that ospreys travel during migration periods, sometimes crossing the Sahara to reach West Africa, their mortality rate is considerably high. As such, it was important to host a high number of juveniles in order to increase the chances of them nesting in Portugal. Still, the project has been a success. Several birds that had been released in previous years have returned, which means that these ospreys already recognize Portugal as their home.

And then, in 2015, the first Portuguese litters arrived. The breeding pair settled on Vicentine Coast and, for the first time in almost 20 years, two baby ospreys finally hatched in Portugal.

Several other pairs followed, with different amounts of offspring over the years. The nesting of ospreys in this region has also contributed to attracting ospreys from other populations. Nature's 'cog wheels' started to turn on their own: the ecosystem formed itself. 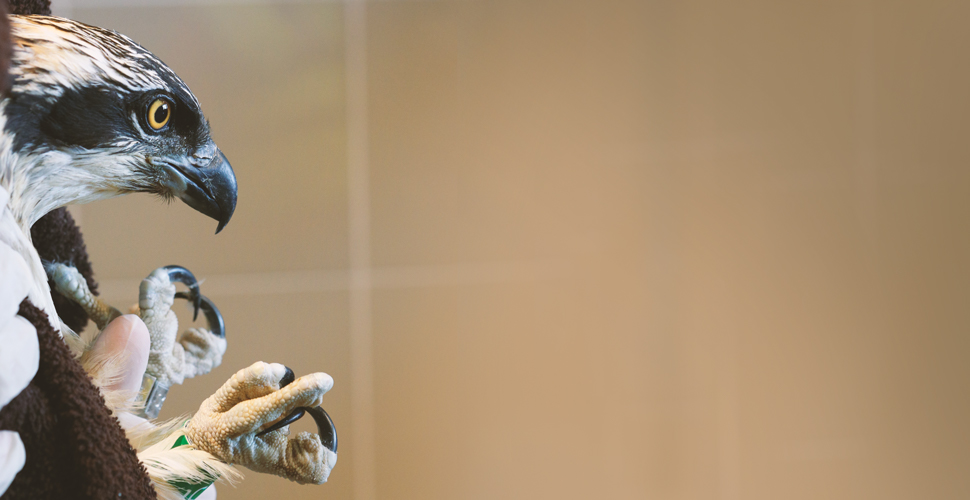 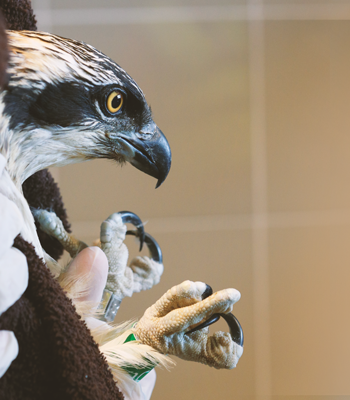 With this osprey reintroduction project the company is advancing scientific knowledge, promoting the improvement of natural ecosystems, and contributing to domestic and global biodiversity.

"The project allows us to further offset environmental impacts. It also advances scientific knowledge in a particularly fragile area: our natural capital. We must all strive to find solutions to reconcile development with conservation." 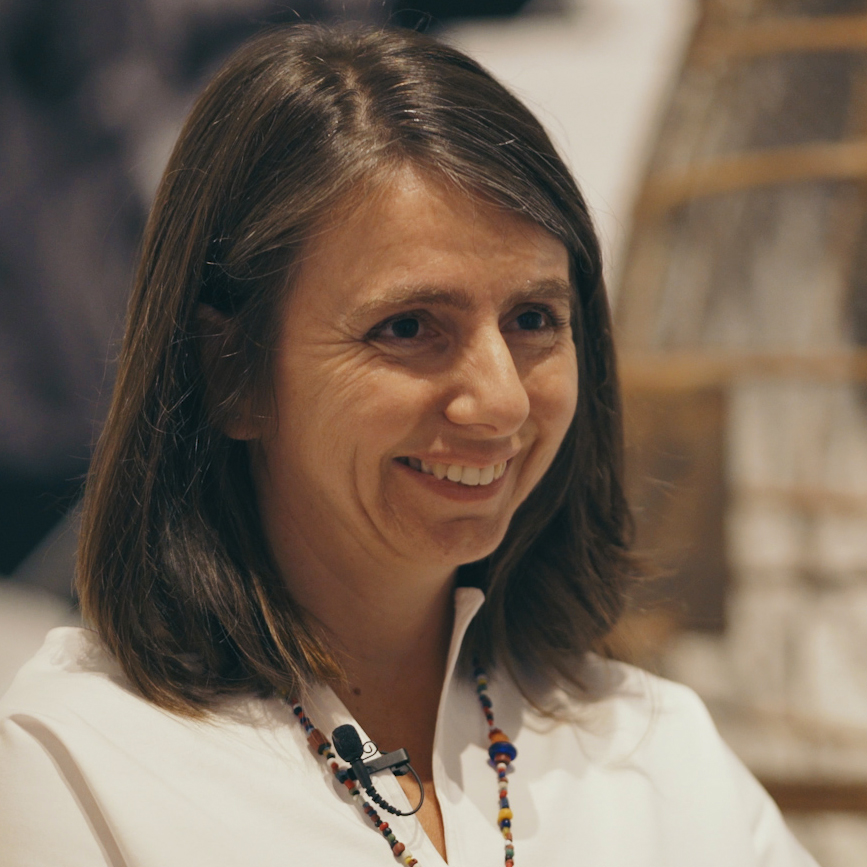 The construction of dams may even benefit ospreys which return to Portugal. Since the species feeds on fish, both at sea and in rivers or reservoirs, these new hydroelectric plants will increase its sources of food. 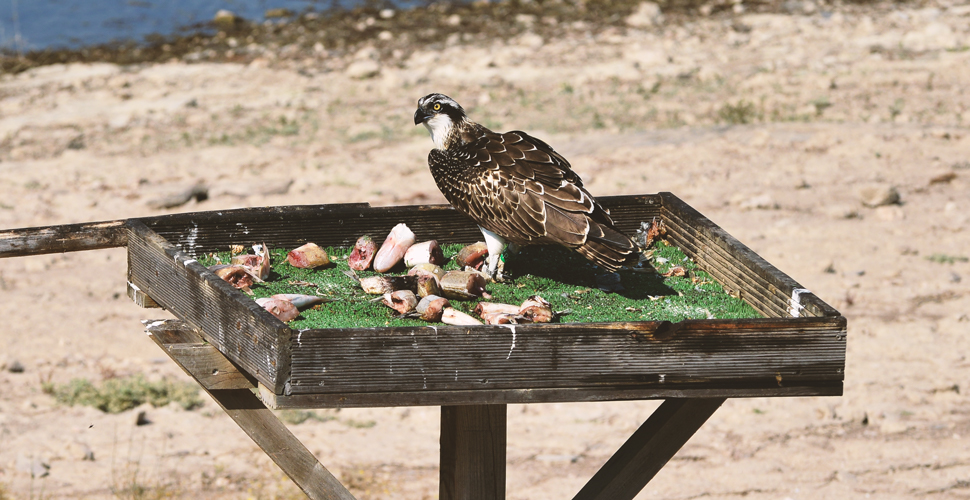 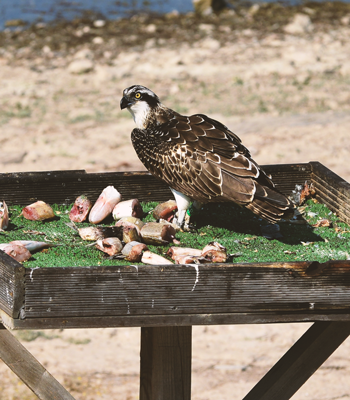 Over the last two years, several platforms have been installed in rivers and dams to improve bird-attracting conditions.

The project was sponsored for 8 years and has had positive results: the ospreys re-nested. The goals were achieved and the foundations were built. It is now up to Nature to carry on her work. The Osprey Project is not unique in EDP. As part of its Environmental Policy, the company is committed to biodiversity conservation in the regions where it operates.

In Trás-os-Montes, for instance, where Baixo Sabor Dam is located, EDP has worked with local communities and environmental associations from the outset. The goal? To mitigate the company's impact by means of a natural heritage conservation program that includes socioeconomic variables - an unprecedented challenge not only within EDP but also in the country.

The company has made a 75-year commitment, comprising a set of 52 conservation measures to be implemented in an area spanning about 12,000 hectares - the size of 12 thousand football pitches. Spread over nine municipalities, this area is four times larger than that flooded by the reservoir.

Efforts to help preserve biodiversity extend beyond Portugal. The Royal Kite is one of the most narrowly distributed birds of prey in Europe: Germany, France and Spain account for 90% of the world's population. For this reason, EDP is sponsoring a project that seeks to expand knowledge about the species in Spain.

In addition to these projects, bird and environment protection is part of the company's daily life in the regions where it operates. A good example of this is the Avifauna Protocol, established in 2003 in Portugal as a technical-scientific partnership to mitigate the impact of overhead electricity lines (high and medium voltage). Over the last 14 years, 648 km of critical electricity distribution lines have been corrected.

All these initiatives are in line with UN Sustainable Development Goal (SDG) 15 - Protecting Life on Land. The UN Sustainable Development Goals are a set of 17 goals that were agreed upon by 193 governments to tackle the world's most pressing problems by 2030: ending poverty, fighting inequality, and putting an end to climate change. EDP has been particularly focused on SDG 15 and committed to the protection of ecosystems.