A New Way to Generate Energy

The first floating wind farm in Portugal will be built by the end of 2019, and it will also be one of the largest floating wind farms in the world. This is an important step in creating a more sustainable future, and, understandably, it brings some curiosity. We are used to seeing huge wind turbines across the country, but... floating turbines? And at high seas?

Discover the mechanics of this clean energy production technology, the challenges it brings, and get a general idea about this industry, which will certainly "spread like the wind" in the coming years.

What do you know about the wind?

Wind energy has been used to move all kinds of mills from time immemorial - since the 1st century BCE, to be more precise. Back then, Heron (an engineer and mathematician from ancient Alexandria) invented and created the first machine activated by wind energy: an actual musical instrument, an organ. The instrument included a small windmill which, when spinning, would activate a piston and cause the air to flow through the organ's tubes, producing sounds similar to those of a flute. 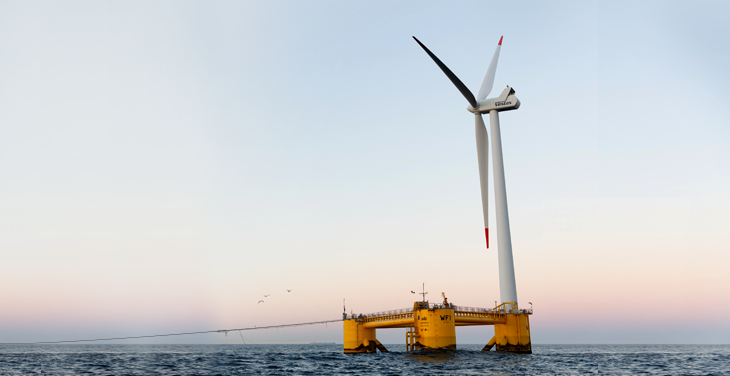 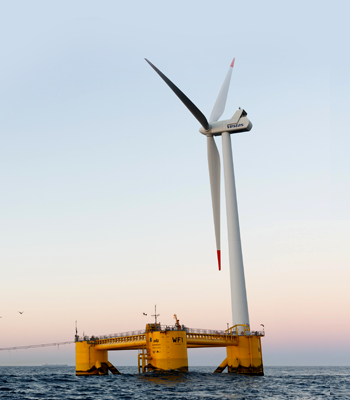 Since then, windmills have served a variety of purposes, from grinding grain to pumping water and, more recently, producing electricity. But to optimize this renewable energy source, technology had to be improved and wind behavior had to be studied in detail. Harnessing this energy source depends on several factors. Let us have a look.

Roughness: The wind industry uses a scale to classify the roughness of a terrain - the "rougher" the terrain is, the slower the wind. Thus, while a forest can have a roughness class of 3 to 4, the surface of the sea or of a lake has an insignificant influence on the wind, which means that it has a roughness class of 0. It becomes obvious why there is a push for the deployment of offshore wind turbines, right?

Turbulence: Those who don't like to travel by plane have probably felt this phenomenon before. This is an irregular airflow movement that can be caused by storms, gusts of wind in several directions, or high roughness areas (in these cases, due to the obstacles the wind finds on its way). Turbulence reduces both wind energy production and the lifetime of wind turbines.

These and other effects have to be considered when implementing a wind farm and have far-reaching implications - for instance, in the distance between turbine towers. The turbulence effect can be three times as large as the size of the object that causes it, so it is important not to deploy turbines near large obstacles.

How to build an offshore wind farm in 3 steps?

Contrary to what the name suggests, it is also possible to deploy 'offshore' wind farms in terrestrial bodies of water such as lakes, fjords, and coastal areas.

Deploying an offshore wind farm is a huge challenge which involves several professionals and various works, such as dredging the seafloor, transporting, assembling and setting the foundations, and installing submarine cables.

These activities also require specialized equipment, as well as people to operate the machines and support infrastructure. For all these reasons, offshore wind power farms are much more expensive than onshore farms. Nevertheless, they provide a high return on investment, both economically and environmentally.

Imagine that in a post-apocalyptic setting or in a parallel universe, you and a group of friends are the only hope to restore your community's electricity supply, so you decide to build an offshore wind farm. Well, you never know what will happen tomorrow, so we offer you some general guidelines on the process.

Step 1: Fixing the turbines to the seabed

The first step would be to find out how to deploy the wind turbines in such an unstable terrain as the bottom of the sea or of a lake. This is achieved through specific foundations for offshore wind farms, which can be designed and manufactured in different ways.

As this is the structure that will connect the wind turbine to the 'ground', the specific conditions of the terrain, as well as the pros and cons of each type of foundation, must be taken into account.

The foundation must support not only the static loads (such as the weight of the aerogenerator) but also the dynamic loads (such as wind gusts and earthquakes). Therefore, it is necessary to conduct several studies - such as meteorological and geological assessments - in the offshore farm deployment area.

In addition to the difficult choice of the foundation, three methods can be used to stabilize the latter on the seabed:

In shallow waters, such as the North Sea, bases are installed on the seabed. But at great depths, floating platforms are the best option.

Wind turbines or aerogenerators are the most common names for the conversion systems used for turning wind power into electrical energy.

Whether onshore or offshore, the electricity production system is similar: the wind turns the blades, making a shaft move, which in turn is connected to a generator, converting the wind's kinetic energy into electricity. The generator basically consists of a magnet and a coil which, that when rotated one over the other, produce electric current. This current is then channeled to an onshore transformation station and distributed by the electrical grid. 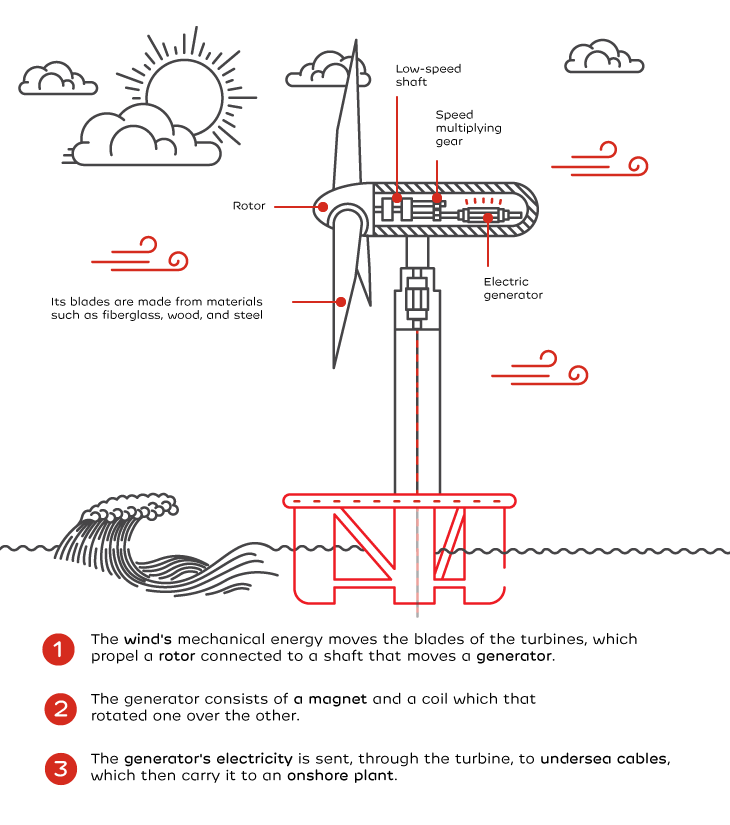 But let us return to the scenario in which you were faced with the task of building an offshore wind farm. In order to use oceanic wind currents to produce electricity as effectively and safely as possible, the best option would be to deploy large aerogenerators that could withstand constant wind power.

The wind industry has been adapting conventional wind turbines to high-sea conditions. The main differences lie in the materials used: in offshore conditions, wind turbines include corrosion protection solutions, dehumidification support systems, and improved metal coatings in the machine casing.

In fact, wind turbines have changed a lot over the past 30 years. Initially, only constant speed turbines (which dominated the market until the late 1990s) were available: turbine rotation speed was dictated by grid frequency, thereby preventing generator speed from adjusting to wind speed.

These turbines have evolved into variable speed systems. These systems make it possible to decouple grid frequency from the frequency which is imposed on the generator by wind speed (along with turbine aerodynamic control), allowing us to operate the system at various speeds.

The concept of variable speed is being adopted by manufacturers and most commercial models use it nowadays, so this would probably be your choice in our post-apocalyptic scenario.

As we have seen, offshore wind farms require specific support structures for aerogenerators as well as turbines that can withstand high-sea conditions. But we need to find a way to bring electricity onshore.

There are several electricity transmission systems, but offshore systems have very restrictive deployment, operation and maintenance requirements. The most commonly used ones are known as High-Voltage Alternating Current Transmission Systems. This technology requires nothing more than a submarine cable, an offshore substation, an onshore substation, and a common AC connection point.

Once these conditions have been met, you will have accomplished your mission of using offshore wind energy to produce electricity, bring it onshore, and inject it into the electric grid before finally reaching people's homes. 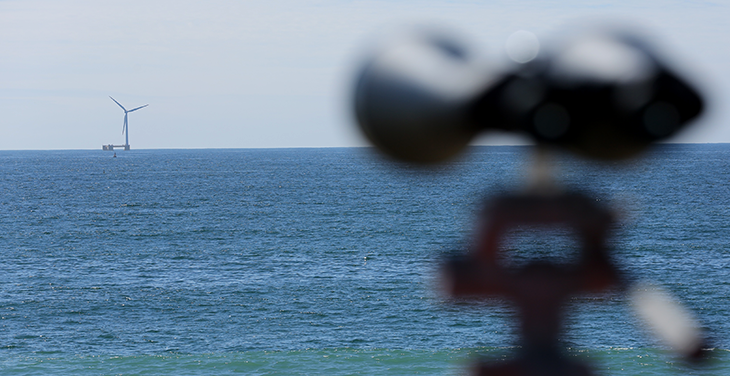 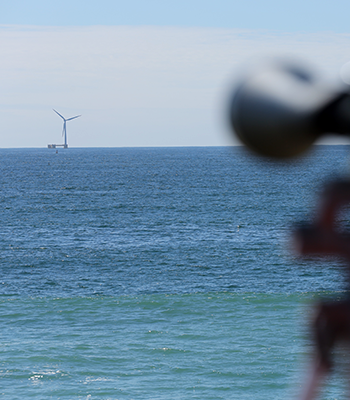 The Pilot Project in Portugal

Back in 2011, EDP - in partnership with Inovcapital and Principle Power - deployed the first floating wind tower in Portugal, located off the coast of Aguçadoura, near Póvoa de Varzim.

Over 5 years, and with a 2MW wind turbine, the platform used the strong winds of the Atlantic Ocean to produce enough electricity to supply 1,300 homes. It was built at Lisnave (to the south of Lisbon) and towed for 400 km to Aguçadoura, where it was finally installed. 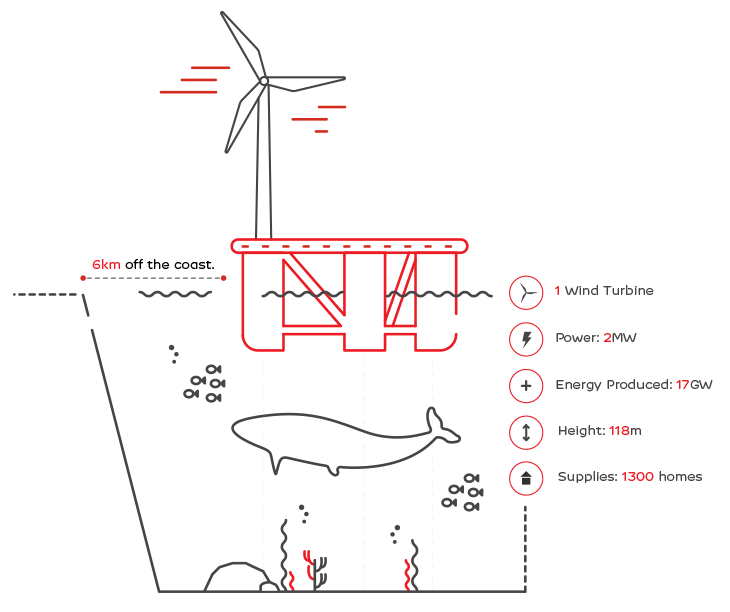 WindFloat1's success paved the way for the construction of one of the largest floating wind farms in the world, which will be built 20 km off the Portuguese coast, near Viana do Castelo.

The project is called WindFloat Atlantic and was created by EDP Renováveis, Repsol and Principle Power with €60 million funding from the European Investment Bank.

The wind farm should be ready to inject energy into the grid by the end of 2019, providing enough electricity to supply 16,000 homes. The WindFloat Atlantic farm will have three 8.4MW aerogenerators and the platforms will be deployed in-line, all at the same latitude, and at about 600 m from one another.

Since the platform will be deployed in very deep seas off the coast of Viana do Castelo, floating foundations (rather than 'traditional' foundations, whose bases are fixed to the seabed) have been chosen - hence the term WindFloat. This project will thus contribute to creating a new technological standard in wind power exploitation, paving the way for the implementation of similar solutions in deeper seas all over the world. 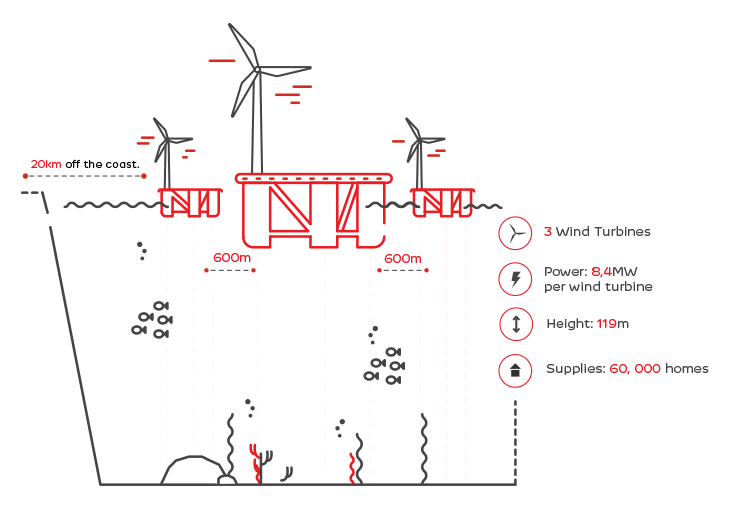 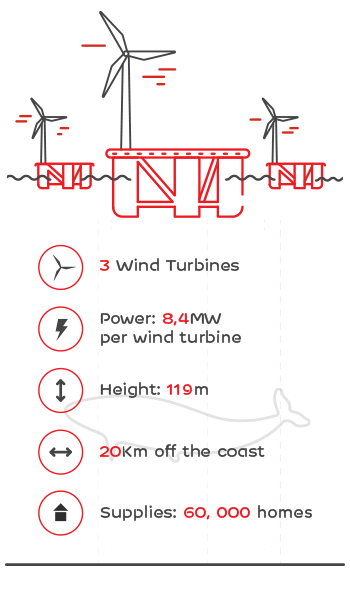 Offshore Windfarms around the world

Built off Denmark (Vindeby) in 1991, the world's first offshore wind farm was met with skepticism from the energy industry: the wind farm was considerably smaller than the usual coal-fired power stations and built over salt water in what were - back then - dubious circumstances.

But skepticism quickly gave way to enthusiasm when the industry realized that offshore production was more efficient than onshore systems. Technological advances followed and so did the deployment of turbines, first in Europe and Asia, and then in the US and the rest of the world.

Nowadays, wind power is mainly exploited in the North Sea - off the coasts of the UK, Belgium, the Netherlands, Germany, and Denmark. But it has been expanding significantly in the seas of China, which is now one of the top 5 producers in the international market.

According to Bloomberg, the industry will continue to grow worldwide until 2030 - and in some regions, installed capacity will more than triple over the next 10 years. 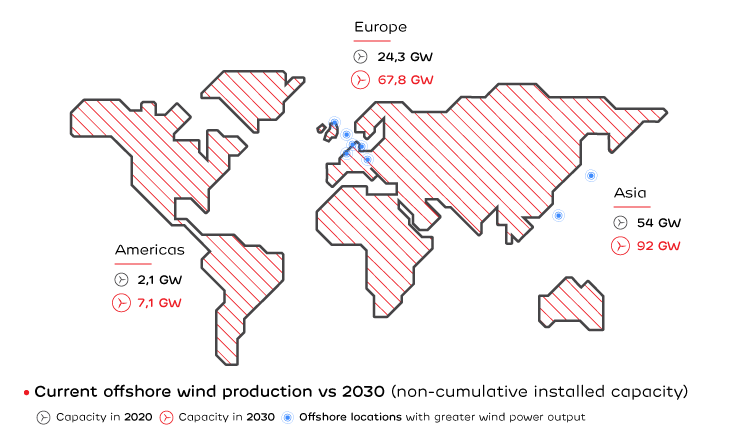 What the future holds

EDP develops its wind power projects through EDP Renováveis (EDPR). Operating in 13 countries from Europe to the Americas, the company's value chain includes the development, engineering and operation of wind power generation platforms.

Offshore farms play an increasingly significant role in EDPR's business, as shown when the company won the auction for the operation of Mayflower Wind Farm - a structure located off the US east coast, with an installed capacity of 1,600MW, which is expected to start operating in 2022.

"Winning this auction further strengthens EDP's position in what has been a new avenue of growth for the Group: offshore wind farms," António Mexia said, adding: "EDPR is now entering the offshore segment in the world's fastest growing renewable energy market, the US, where the company is already a major onshore wind power player."

Projects such as WindFloat position EDP as a world leader in offshore wind technology and further strengthen the importance of renewable generation in the energy sector. In addition to the recent auction win in the US, EDPR also operates in Scotland, is building two offshore wind farms in France, and has plans to bid for future offshore power plants in that country.

Wind power has been one of EDP's main focus areas, not only in order to take advantage of this abundant natural resource, but also to contribute to the expansion of clean energies and the decarbonization of society, in line with the Sustainable Development Goals it has undertaken to implement.